All rats are cows. No cow is white.

Il. No rat is white.

Ill. Some whites are rats.

IV. All cows are rats.

B. Only IV follows

Explanation: As per the Venn diagram, conclusion I and II follows

I. Some apples are guavas.

II. All apples are oranges.

III. No orange is a papaya.

IV. All papayas are guavas.

I. Some papayas are apples.

II. Some oranges are papayas.

III. Some guavas are oranges.

A. Only conclusion III follows

D. Only conclusion I follows
Answer : Option A
Explanation: As per the Venn diagram, conclusion III follows 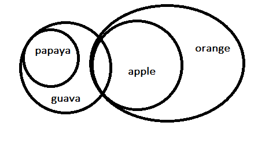 I. All stamps are baskets.

II. II. Some baskets are hamsters.

I. All baskets are hamsters.

II. II. Some hamsters are stamps.

More than one billion years’ worth of rocks have gone missing from the geologic record of Grand Canyon.

A. Earth has transitioned from an older setting to the modern one during these one billion years.

B. None of the mentioned options.

C. The western half of the Grand Canyon has gone through a very different geologic contortion compared to the eastern half.

D. Series of Faulting events in that region possibly tore up the earth around the Canyon causing rocks and sediments to wash away in the ocean.
Answer : Option D

Explanation: In a new study, researchers led by Peak identify a likely cause for the missing rocks: the breakup of Earth's ancient supercontinent Rodina approximately 700 million years ago. The upheaval was so violent it likely washed rocks and sediment into the ocean — one billion years’ worth, in the case of the Grand Canyon, option D is correct.

Q5) Mark the option containing the sentence that strengthens the argument given below.

A. They are easy to wash and easy to dry.

B. Light colour clothes are bad absorber of light.

C. These light colour clothes are thick and warm.

D. They are readily and cheaply available in the summer.
Answer : Option B
Explanation: Light colours are poor absorbers of heat , that’s the reason People generally wear light colour clothes in summer.
Q6) The question given below is followed by two statements numbered I and II. Determine if the statements are, individually or together, sufficient to answer the question.

Question: What is the Cost Price of flour?

I. Kevin mixes flour and sugar in the ratio 3:5 to make pretzels. He sells pretzels at $10 per kg.

A. Statements I and II together are not sufficient to answer the question asked and additional data to the problem is needed

B. Each statement alone is sufficient to answer the question

C. Only one of the statements, alone, is sufficient to answer the question but other statement is not

D. Both statements I and II together are sufficient to answer the question asked but neither statement alone is sufficient

Answer : Option D
Q7- Q10) Direction for Q7 to Q10: Read the following information given below and answer the questions that follow :

Six friends - Sheldon, Jack, Justin, Bruce, Peter, and Nicholas are sitting around a circular table, not necessarily in the same order. All of them are facing the center.

I. Peter is sitting exactly opposite to Jack.

II. Justin is the only person sitting between Bruce and Peter.

A. Bruce and Justin

B. Nicholas and Peter

Explanation: Using statement one I. Peter is sitting exactly opposite to Jack.

Using statement III. Sheldon is sitting to the immediate left of Jack.

By statement II. Justin is the only person sitting between Bruce and Peter. 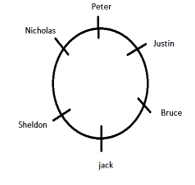 Hence, Nicholas and Justin are not immediate neighbours.

Q8) Who is sitting second to the right of Peter? 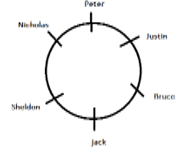 As per the arrangement , the person second to the right of Peter is Sheldon
Q9) Who is sitting to the opposite of Sheldon? 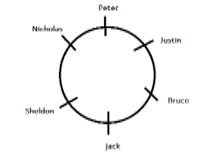 Justin is sitting to the opposite of Sheldon.
Q10) Which of the following is false regarding the position of Jack?

A. Jack is sitting third of the left of Nicholas.

B. Jack is sitting second to the right of Nicholas.

C. Jack is sitting between Bruce and Sheldon.

D. Jack is sitting to the immediate left of Bruce
Answer : Option A
Explanation: 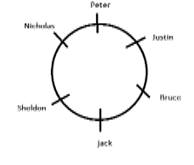 Jack is sitting third of the left of Nicholas is false.
Q11 - Q14) Direction for Q11 to Q14: Read the following information given below and answer the questions that follow :

There were six participants - M, N, O, P, Q and R in the final of coffee making competitions. The six participants belong to six different locations - Delhi, Mumbai, New York, Paris, Tokyo and London. David, the
judge of this competition, rated the coffee prepared by the participants on a scale of 1 to 10 giving a unique rating to each participant.

I. R was from London.

II. Participants from New York got the highest ranking, but was not O.

III. Only two participants got ratings in even numbers.

V. N got the minimum rating and the rating was an even number.

VI. O got a higher rating than M.
Q11) What was the second highest rating given?

III. Only two participants got ratings in even numbers.

Participants from New York got the highest ranking, but was not O, as O is not highest 10 and 5 isn’t possible, and only two participants got even N is already even rank hence 4 and 8 , 2 and 4 not possible

R was from London. Participants from New York got the highest ranking, Hence R is not highest possible ranks left are 9,7 ( even numbers can’t be taken) R will be 7 and the left P will be 9 and belongs to New York.

The second highest rating given is 7.

Explanation: P belongs to New York as per above table.

Q13) What was the rating of coffee prepared by Q?

Explanation: the rating of coffee prepared by Q is 3 as per above table.

Q14) Which of the following statements is definitely true?

Explanation: M got a rating of 5 is definitely true.

Direction for Q15 to Q16 : The statement given below is followed by two conclusions. Assume the statement is true, even if it contradicts commonly known facts, and determine the conclusion/s that logically follow/s from the statement.
Q15) Statement :

I. The coming festive season could be dangerous if safety norms are flouted and lead to a surge in COVID cases.

II. Vaccine provides over 95% protection against severe disease and hospitalisation.

Government has started to offer incentives and subsidies on Electric Vehicles.

I. Pollution can be mitigated by the use of electric vehicles.

II. Electric vehicles are not pocket friendly as compared to conventional petrol/diesel vehicles.

Explanation: Only Conclusion II follows , anything about pollution isn’t discussed in the statement hence conclusion I doesn’t follow