Q1) Amar caught an earlier train to home today than which he usually takes. His wife normally drives down in a car to pick him up from the station. Today he set out on foot from the station to meet his wife on the way. He reached home 12 minutes earlier than he would have done had he waited for his wife. The car can travel at a uniform speed that is 5 times Amar’s speed on foot. Amar reached home as the clock was striking 6 o’clock (pm).

What time would Amar have reached home, if his wife, forewarned of his change of plans, had meet him at the station? 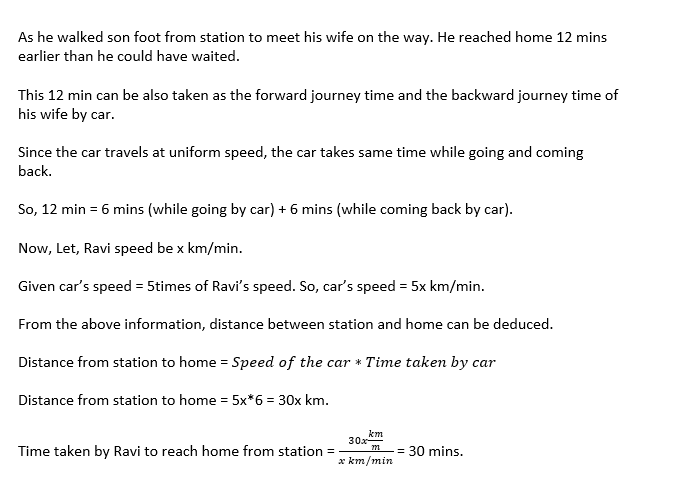 Q2) A gentleman starts at 7 km/hr to go to his native place. A messenger started 30 min later, follows him and overtakes him after he has gone over 17 ½ km. At what rate did the messenger follow the gentleman?

Time for which gentleman was ahead = Distance ÷ Speed

So, by the given condition,

Then the present age of the husband=4×8years=32years &

Then, by the given condition,

Q4) Arti and Barkha start swimming towards each other from the deep end and shallow end respectively of a swimming pool in Funcity. They start their swimming simultaneously in the pool of 300 m length. The ratio of their speeds is 1:2 respectively. Each swimmer rests for 6 seconds once she reaches the other end and starts swimming back. Where will they meet for the second time in the still water of swimming pool?

D.30 m from the shallow end

Now, Barkha reached the other end and start to her initial point (shallow end) = another 150 sec.

So, totally Barkha takes 306 seconds time to reach her first point, which is the shallow end.

At 306th seconds both of them meet for the second time at the shallow end. So, answer is option A.

Q5) In a certain state, the army was originally organized in battalions, each of 1500 men. After calling up a further 10000 recruits the army was rearranged so that there were 2000 men in each battalion and the state claimed that it had reduced its army by 50 battalions. What was the number of battalions originally?

Each battalion has 1500 number of men.

So, as per question statement:

Each battalion has 1500 number of men.

So, according to the given information,

Given that there are 10000 new recruits,

And the equation becomes,

Q6) An employer reduces the number of his employees in the ratio 9 : 8 and increases their wages in the proportion 14 : 15 .The difference in wage bill if it was previously Rs. 1890, will be

The difference of expenditure is 6 parts.

Answer: Option B
Q8) Four bells are heard at intervals of 6, 8, 12 and 18 seconds respectively since 12 o’clock. How many times can they be heard simultaneously within 6 minutes of the time (excluding the one at the start)? 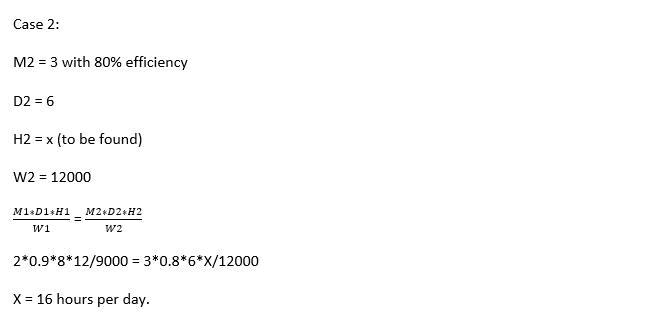 Explanation: We have been given that

These all are mixed together; we have to find the Fineness of the resulting compund.

Fineness=12.23grams
Q11) A boy wishes to cut as many pieces of rope of equal length as he can from pieces that are 104, 78 and 65 m long. If he wants the pieces to be as long as possible and does not like to waste any rope, then how long should each piece be?

thus, 13 m of rope should be cut from the given ropes.

Q12) The weights of three lumps of metal are in the ratio 3 : 4 : 5. By what fractions of themselves must the first two be increased so that the ratio of the weights may be changed to 5 : 4 : 3?

Since the third metal did not change, let us make them in same parts.

So, multiplying the first ratio with 3 and second with 5.

So, option D is the answer.

Q13) A man sells sugar to a tradesman at a profit of 20%, but the tradesman, becoming bankrupt, pays only 72 paise per rupee. How much percent does the man gain or lose by his sale?

Explanation: Let three persons income be A, B and C respectively.

Explanation: As the average age of 30 students is 16 years,

Now, if the age of their teacher is combined with their age,

Hence, the average age of the students and the teacher combined is 17 years.