Q2) The set S of numbers has the following properties:

B. Both statements conclude.

C. Both statements do not conclude.

Sushil, a salesperson, was asked by his Sales Manager to meet one of their high profile clients. Due to his ill health, the sales manager was unable to take updates from Sushil about the meeting. Sushil’s phone was also switched off. On which day did Sushil meet the client?

i. Ravi, one of the sales Manager’s colleague, tells him Sushil did not visit the client either on Thursday or on Tuesday.

ii. Vikash, one of the sales manager’s colleague, tells him that Sushil visited the client 2 days before Ravi contacted the client which was the day after Monday.

A. Either of the statement is sufficient in answering the question.

B. Statement I alone is sufficient in answering the question.

C. Statement II alone is sufficient in answering the question.

D. Both the statements put together are sufficient in answering the question.

E. Both the statements even put together are not sufficient in answering the question.
Answer : Option C

Explanation: Statement i. Ravi, one of the sales Manager’s colleagues, tells him Sushil did not visit the client either on Thursday or on Tuesday. We can say sunil will visit on Monday, Wednesday , Friday and Saturday so statement 1 is not sufficient

Vikash, one of the sales manager’s colleague, tells him that Sushil visited the client 2 days before Ravi contacted the client which was the day after Monday. By using only statement 2 , 2 days before Monday will be Saturday hence II alone is sufficient .

Q4) Find the next number in the series:

Q5) Find the suitable option for the given relation:

Explanation: A building is a complete structure built using bricks.

Similarly, a flower is the complete structure that is composed of petals.

Q6) A man has strayed from his path while on his way to the park. He moves 100km towards south, then another 40km towards west. He then travels 70km towards north and reaches the park. What is the distance of the shortest possible route? 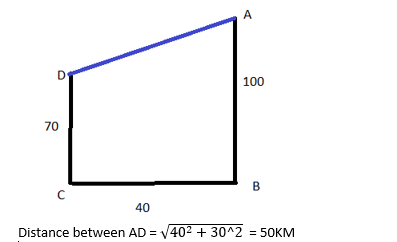 Q7) Given  signs signify something and on that basis, assume the given statements to be true and find which of the two conclusions I and II is/are definitely true.

A. Only conclusions I is true

B. Conclusions II is true

C. Neither Conclusions  I and II true

D. Both Conclusions  I and II true

p = s, s is not equal to T , hence statement II is correct

Q8) Anand introduces Geeta as the wife the grandson of his mother. How is Anand related to Geeta?

Explanation: Anand introduces Geeta as the wife the grandson of his mother.

the grandson of his mother means son of Anand, Geeta is wife of Anand son, hence Anand is father-in-law for Geeta

B.They are at the same place at the finishing point

Q11) Decode the word(s)/ pattern given in the question.

"John is in Football team" is written as "sit pit jit hit lit",

"Steve is in Basketball team" is written as "bit rit fit hit sit".

How is "Steve is in Football team“ written as?

Considering I & ii football team is written as pit & hit

Considering I & iii is in is written as sit & jit

Steve from iii will be written as fit

Q12) Choose the option that arranges the given set of words in the 'most' meaningful order. The words when put in order should make logical sense according to size, quality, quantity, occurrence of events, value, appearance, nature, process, etc.