Q1) The question given below is followed by two statements numbered I and II. Determine if the statements are, individually or together sufficient to answer the question.

Question: What is the first term in a sequence of numbers?

II. The second term is twice the first and the third term is three times the second.

A. Statements I and II together are not sufficient to answer the question asked and additional data to the problem is needed.

B. Only one of the statements, alone, is sufficient to answer the question but other statement is not.

C. Each statement alone is sufficient to answer the question.

D. Both statements I and II together are sufficient to answer the question asked but neither statement alone is sufficient.
Answer : Option D

No information regarding the first two terms. So, statement 1 alone can’t answer.

So, both 1 and 2 together can answer the question. Hence, answer is option D.

These are the place values of alphabets given in the words.

Q3)Find the missing term in the following series.

Q4) The question given below is followed by two statements numbered I and II. Determine the statements are individually or together sufficient to answer the question.

Question: What is the value of x?

A.Both statements I and II together are sufficient to answer the question asked but neither statement alone is sufficient

B.Each statement alone is sufficient to answer the question

C.Statements I and II together are not sufficient to answer the question asked and additional data to the problem is needed.

D.Only one of the statements, alone, is sufficient to answer the question but the other statement is not
Answer : Option C

Since equation 1 and 2 are having infinite solutions.

So, Option C is the answer.

Q5) Read the information given below carefully and answer the questions that follow.

- XUV is parked to the immediate left of Eco sports and is opposite to Brio.

- Duster and i20 are parked diagonally opposite.

- Scorpio is parked opposite to i10 which is to the immediate right of Zen.

- Polo is parked to the immediate left of Brio and is opposite to Eco sports.

- Zen is parked to one of the extremes.

Which car is parked third to the right of i10?

Explanation: The arrangement as per the given conditions is as follows,

Q6) Choose the correct alternative that will continue the same pattern and fill in the blank spaces:

Explanation: The given series is a prime number series. So, the missing prime number is 13. So, option B is the correct answer.

Q8) Find the odd one out of the given options.

Explanation: The odd one is Iodine. Because the others are metal and are in normally solid state but in case of Iodine it is not metal and it normally appears as liquid.

The principal instructed all the teachers to be careful in class because some students may disturb other students.

I. The teachers may handle the situation properly and they may restrict the naughty students.

II. The students will welcome the decision of the Principal.

A. If only assumption I is implicit

B. If only assumption II is implicit

C. If either I or II is implicit

D. If neither I nor II is implicit

Explanation: Clearly, teachers have been instructed to maintain discipline in the class and point out the naughty students who do not let other students’ study. So, statement I is implicit. Regarding students welcoming or not we can’t decide that, so II doesn’t implicit.

A man walks 5 km towards south and then turns right. After walking 3 km he turns to the left and walks 5 km. Now in which direction is he from the starting place?

Explanation: The direction from the starting point is South-west 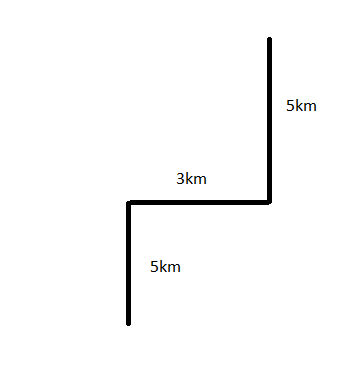 Q11) Event (A): Company X is opening an office in city Y for marketing the company's products.

Event (B): Company X has chalked out an expansion plan, involving raising

production capacity at its existing plants.

A. If 'A' is the effect and 'B' is its immediate and principle cause.

B. If 'B' is the effect and 'A' is its immediate and principle cause.

C. If 'A' is the effect but 'B' is not its immediate and principle cause.

D. If 'B' is the effect but 'A' is not its immediate and principle cause.

Explanation: Events (A) and (B) are related events and chronologically (B) occurs before (A) and because of as they are planning to increase capacity, they have to make a plan to sell their products also so they open new offices for marketing those products. But opening an office in a particular city, requires other events such as market survey etc. It is not the immediate and principle cause.

Q13) The question consists of two terms which have a certain relationship with each other followed and if the same relationship is followed, which pair will be followed?

Explanation: Absence of Light will make Blind and absence of Speech will make Dumb.

Cutting down of forests is a threat to the wild life. Most of the species of animals are on the verge of extinction.

I. The species of animals, which are on the verge of extinction, must be protected by creating wild life sanctuaries which contain flora that defines the native habitat of the endangered animals.

II. To the maximum extent possible we should stop deforestation.

A. Only II follows

B. Only III follows

Explanation: Cutting down of forests is a threat to the wild life. Most of the species of animals are on the verge of extinction.  Only III Growing urban forests to compensate for deforestation follows .

Q15) Study the following information carefully and answer the given questions:

A word and number arrangement machine when given an input line of words and numbers rearranges them following a particular rule in each step.

The following isan illustration of input and rearrangement:

This is the final arrangement and step VI is the last step for this input.

How many steps will be required for getting the final output for the following input?

Explanation: Step I: The smallest number becomes first and the remaining numbers shift one position rightward.

Step II: The largest number among given numbers becomes last and the remaining numbers shift one position leftward.

The steps are repeated alternately till all the numbers get arranged in ascending order and that will be that last step for that particular input. Hence 8 steps